Say, you have an external USB drive for TimeMachine backups on OSX. (You make backups, don’t you?) Now you want to replace it with a larger drive, so the task is to copy all the data to the new disk. There are two ways to do it:

The latter approach seems to me a better one for the exact duplication of a TimeMachine backup drive. How I did it and a few necessary steps follow.

Of course, we’ll use the classic UNIX tool dd for disk cloning. The already present in OSX version is old, so it’s better to brew install coreutils to get a new version that natively displays the progress.

Connect both disks and identify the devices in /dev with:

Disks 0 and 1 are internals, don’t touch those. Disk 2 is my old 1 TB backup drive, with an encrypted HFS+ partition labeled fooo, so /dev/disk2 is the source. Disk 5 is the new 3 TB drive with one empty HFS+ partition, so /dev/disk5 is the destination. Nota Bene: I will use my example identifiers below, and you must use yours; be very careful when typing them, or e.g. you may corrupt the internal disk.

Unmount all partitions of both disks:

Now my cloning command is based on this Stack Exchange answer:

time will print the whole execution time. caffeinate is a standard OSX command to prevent computer sleep while the command is executing. sudo is necessary to have access to the raw disks. gdd is the newer dd from the coreutils package. if and of are the source and destination disks respectively; also note that the files are /dev/rdiskX with the extra r — this bypasses some system caches and make the process faster. bs specifies the block size of 1 MB, other values may be faster for your setup.

This will take some time depending on the disk size. Approximately 11906 seconds later it was done (the peak speed was about 111 MB/s near the beginning):

Now I disconnected both disks and reconnected the new one; note /dev/disk2 is the new disk now:

As seen in the previous listing, the disk has 3 TB, whereas the partition #2 is still 1 TB. Copying the disk block-by-block duplicated the partition structure as-is, meaning they have exactly the same sizes as before. The newer disk is larger, so we want to resize the user’s partition to the maximum.

At first, I went to the standard Disk Utility and attempted to resize the partition, but it would be too easy if it worked. It displayed the free space, but I couldn’t drag the sector to increase the size of my partition: 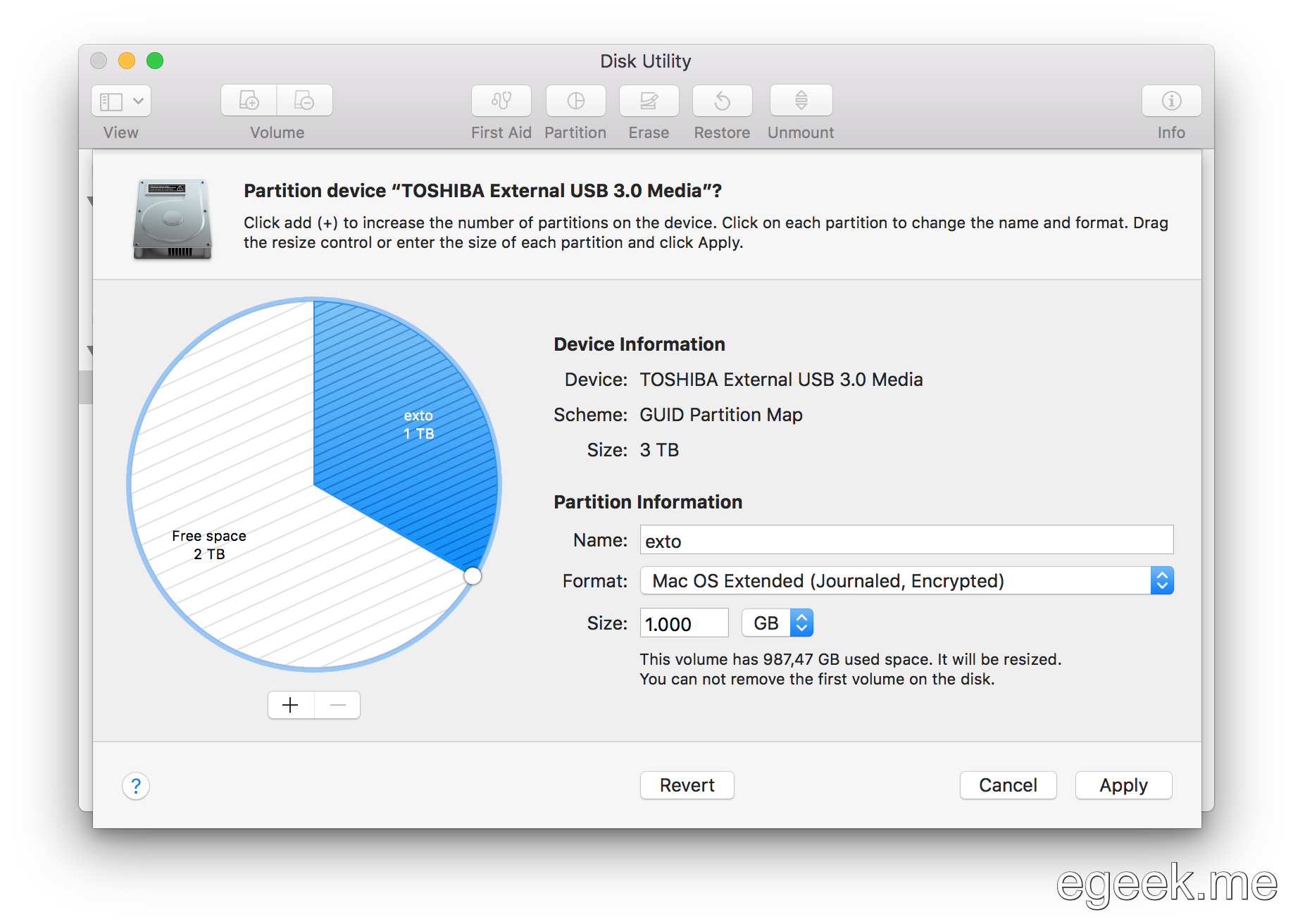 Adding new partitions didn’t use the “Free space 2 TB” area either. There is nothing else to do in Disk Utility.

The problem here is that the GPT header contains the pointer to the backup GPT, which should be located at the end of the drive. That’s why nothing can use the extra space at this point; therefore we need to either recreate or update the GPT.

Searching for answers online, I bumped into two Stack Exchange questions: Resizing HFS+ volume after cloning and Resizing or expanding a CoreStorage volume, where answers show how to rebuild the GPT. From them I discovered the gpt tool. If you’re careful, there isn’t much harm in rebuilding the partition table as the answer suggests — this doesn’t touch the partitions themselves, so if you restore the metadata correctly, it all should work.

I played with that, but it didn’t help. If I remember correctly, the partition GUIDs changed and CoreStorage logical volume wouldn’t mount. I won’t replicate and describe those steps here. At least, it was easy to restore the original GPT from the old disk using gdd.

gdisk to the rescue

FYI OSX is very annoyingly persistent at remounting the volumes after any touch, so I needed to diskutil unmountDisk /dev/disk2 very often!

The fix is to use the gdisk command to move the backup GPT to the end of the disk and update the primary GPT to match that. Essentially, the commands are x for expert mode, e to move the GPT, and w to update data on disk. Here’s the listing with the output:

Now we can resize the partition!

We can use all the space now!

Note that these are more straightforward steps than what I tried the first time. I didn’t have some of those errors now.

Wikipedia’s article on GPT contains more details, such as the description of the header fields and standard partition type GUIDs.

The first EFI partition is actually FAT, you can mount it with sudo mount -t msdos -o ro /dev/disk2s1 ~/Desktop/EFI.

The last Apple_Boot partition is HFS, you can mount it with diskutil mount /dev/disk2s3.

PPS. Is it a correct approach?

Only after this cloning, I stumbled upon Apple’s old (from 2006) “Technical Note TN2166: Secrets of the GPT”, which says this:

Be careful when doing a block-for-block copy of a GPT disk. The GUID in the partition table header that identifies the disk (and the GUIDs in each partition entry) are meant to be globally unique, and Apple’s system software relies on this feature. If you block copy a disk, you should consider whether it’s appropriate to set these GUIDs to new values. …
If you don’t follow this advice, you may encounter weird problems. For example, if you duplicate a disk without updating the GUIDs, the computer might boot from either the original or the copy in an unpredictable fashion (perhaps toggling from boot to boot).

And indeed, when the new backup drive is mounted and I connect the old one with the same GUIDs, it fails to mount:

diskutil is confused — there is no label for /dev/disk5s2.

I haven’t found a way to change the UUID of an existing CoreStorage Logical Volume and Volume Group. I could’ve manually edited the GUIDs in the GPT, but that would not touch the CoreStorage virtual volumes. So instead I recreated the whole thing from scratch (connecting only the old drive, which is /dev/disk2 now):

The CoreStorage LVG and LV are recreated with the new GUIDs. Both drives can be mounted without a conflict. We are done.